﻿Tanner and Casey was founded on June 17th, 2007. The drawings back then... well... sucked. But with the positive feedback from his family, creator Tanner Riche pushed forward. Beginning with only 4-5 characters it was still a great strip, and in late 2007-2008 there were also temp. characters. By 2010 the style of the art had changed by FAR to a MUCH better look as we know today. By 2012, with many fans locally and a few from far away, and great jokes, Tanner and Casey welcomed Facebook, where the fan count grew even more. In early June 2013 the real Casey died, but she still lives on in our humorous little comic, signifying a relaunch of the strip that December, from which it has been running steadily ever since online, in books, and in newspapers.

Disclaimer of comic:
short: The wacky comic life of a dog, her friends, and her family!﻿
long: Tanner was down on his luck, at a dead end without a job and a pet to care for. Fortunately, his friends, a family of 5 with two cats, welcomed them in until Tanner can get back on his feet. But it isn't always easy when you have 9 things crossing paths, and the jobs still aren't coming in... 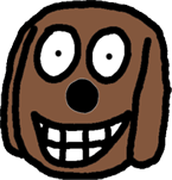